DF27 has no known phylogenetic equivalents at this time. This implies that the first DF27+ male was born not long after the P312+ most recent common ancestor. The P312 ancestor could easily have been a great-grandfather or even closer in relation to the first DF27+ male.

If you are researching the male line of Y-DNA Haplogroups DF27, a subgroup of the R1b, I hope you find this site helpful.

If you have tested positive for R1b, or DF27, or any of it’s subgroups, please use the links below to determine your unique haplogroup and submit your results to our Yahoo group and please include your results on FTDNA’s website.

The Y-DNA test tells you about your direct male line, which would be your father, his father, and all the way back in time. Y-DNA also tells you about the history and location of your surname, or your last name.

The Bronze Age started in Mesopotamian and helped spread ~7,000 years ago in R1b1a areas between the Black Sea and Caspian Sea, which fueled a rapid expansion into Europe, replacing the existing Iron Age farming cultures… (The Black Sea flooded-in ~10,000 years ago when the Mediterranean Sea rose rapidly [see UNESCO study, 2009])

R1b consisted of the Yamnaya culture (3,500-2,500 BCE), and spread west into Europe creating the Corded Ware culture, which is ~75% Yamnaya autosomal DNA (aDNA), of the tested skeletons from modern day Germany.  (Also, Yamnaya’s DNA contribution is ~50% of modern Central & Northern Europeans!) The English language derived from the Yamnaya, who had a  Proto-Indo-European language.

… 4,000 years ago, DF27 shows up, a descendant subclade down the Y-DNA branch from R1b, in the Iberian Peninsula, known as Iberia, where modern day Spain & Portugal, as well as Southern France, reside.

2,500 years ago, Greek historian Herodotus said of the Phocaeans, “it was they who made the Greeks acquainted with … Iberia”. Ancient Greek word for Iberia: Ιβηρία.

2,000 years ago, Greek historian Strabo, working for the Romans, refers to the Carretanians as people “of the Iberian stock” living in the Pyrenees, who are to be distinguished from either Celts or Celtiberians.”

Note: the Celts were a Culture, not a specific Y-DNA branch or bloodline, more of a group of a few different Y-DNA branches. Same with the Corded Ware cultures.

Welcome to the new website, focusing on the Y-DNA Haplogroup DF27, a sub group of the large R1b Haplogroup.

*NOTE: This Tree is always evolving, and is based on multiple other Trees that exist, such as FamilyTreeDNA, Isogg, YFull, The Big Tree, etc

The Bronze Age did not appear in Iberia until 1800 BCE, and was mostly confined to the cultures of El Argar and Los Millares in south-east Spain, with sporadic sites showing up in Castile by 1700 BCE and in Extremadura and southern Portugal by 1500 BCE. These Early Bronze Age sites typically did not have more than some bronze daggers or axes and cannot be considered proper Bronze Age societies, but rather Copper Age societies with occasional bronze artefacts (perhaps imported). These cultures might have been founded by small groups of R1b adventurers looking for easy conquests in parts of Europe that did not yet have bronze weapons. They would have become a small ruling elite, would have had children with local women, and within a few generations their Indo-European language would have been lost, absorbed by the indigenous languages (=> see How did the Basques become R1b ?).

Iberia did not become a fully-fledged Bronze Age society until the 13th century BCE, when the Urnfield culture (1300-1200 BCE) expanded from Germany to Catalonia via southern France, then the ensuing Hallstatt culture (1200-750 BCE) spread throughout most of the peninsula (especially the western half). This period belongs to the wider Atlantic Bronze Age (1300-700 BCE), when Iberia was connected to the rest of Western Europe through a complex trade network.

It is hard to say when exactly DF27 entered Iberia. Considering its overwhelming presence in the peninsula and in south-west France, it is likely that DF27 arrived early, during the 1800 to 1300 BCE period, and perhaps even earlier, if R1b adventurers penetrated the Bell Beaker culture, as they appear to have done all over Western Europe from 2300 BCE to 1800 BCE. The Atlantic Bronze Age could correspond to the period when DF27 radiated more evenly around Iberia and ended up, following Atlantic trade routes, all the way to the British Isles, the Netherlands and western Norway (where M153 and SRY2728 make up about 1% of the population). 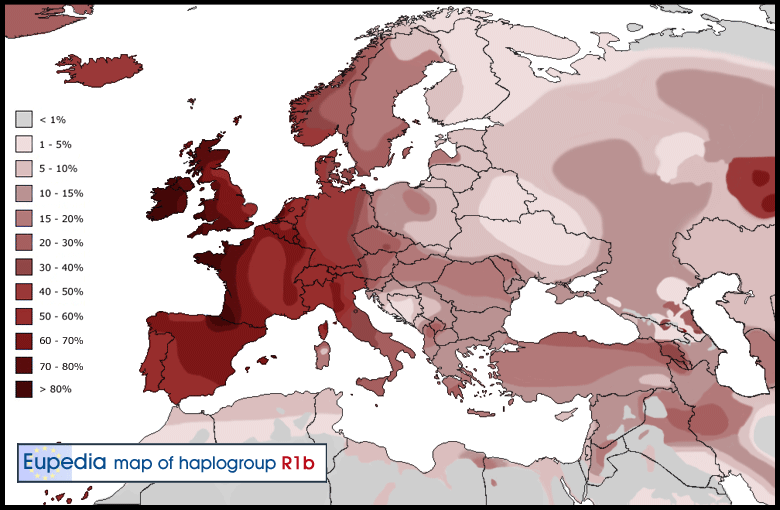 R1b is the most common haplogroup in Western Europe, reaching over 80% of the population in Ireland, the Scottish Highlands, western Wales, the Atlantic fringe of France, the Basque country and Catalonia. It is also common in Anatolia and around the Caucasus, in parts of Russia and in Central and South Asia. Besides the Atlantic and North Sea coast of Europe, hotspots include the Po valley in north-central Italy (over 70%), Armenia (35%), the Bashkirs of the Urals region of Russia (50%), Turkmenistan (over 35%), the Hazara people of Afghanistan (35%), the Uyghurs of North-West China (20%) and the Newars of Nepal (11%). R1b-V88, a subclade specific to sub-Saharan Africa, is found in 60 to 95% of men in northern Cameroon.